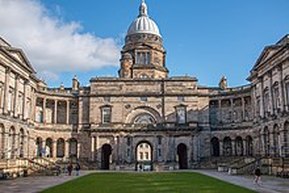 Early employment came in the guise of being a minister in Killyleagh, County Down, but intellectually Bill was drawn to academia. After four fruitful years he thus left parish work and for three years worked towards earning his PhD at New College, University of Edinburgh, of which he spent three semesters researching at the University of Tübingen. In due course, he took up his first lectureship at – what was to become – the University of Sunderland in the north east of England, where Bill progressed from being a lecturer in New Testament to senior lecturer in Humanities.
After five years in the north east of England, the family moved to the midlands where Bill was appointed Head of Religious and Theological Studies at Westhill College, a Free Church College of Higher Education, and part of the Selly Oak Colleges federation.
Whilst at Westhill, Bill enjoyed the warmest of relationships with colleagues at the local Birmingham Roman Catholic Theology Department at Newman College (now University), forming close friendships with successive heads of the Theology Department, initially Fr Dr Arthur McCrystal, followed by Dr Martin O’Kane. Bill moreover was instrumental with SOC President Professor John Ferguson, in the setting up of the Centre for the Study of Judaism and Jewish-Christian Relations at the Selly Oak Colleges. In Westhill itself, Bill created a B.Ed degree with Islamic Studies as a main subject with the appropriate approval for qualified teaching status. This was no mean achievement and gave many young Muslim women (as well as men) access to a career that might otherwise have eluded them. This venture was later followed by a full BA degree in Islamic Studies. This openness to other faiths and at Bill’s instigation transformed Westhill as an institution into one where widening participation and being open to students of all faiths or none became an accepted policy.
In the City of Birmingham Bill served for 14 years (1984-98) as the chairman of the Council of Christians and Jews.